Kalyan Matka (also called Matka Kalyan) is a form of Matka gambling, which is an illegal lottery-based betting game popular in India. We have already talked extensively about how to play Satta Matka. Kalyan follows all the traditional rules of the game.

In this article, we will cover some of the widely searched terms and frequently asked questions regarding this single-digit lottery. Please keep in mind that this information is for beginners and Matka enthusiasts who are just starting out.

As a word of caution, we would like to remind players that Matka in all forms is illegal in India if money and material things are staked. The only legal Matka lotteries Indians can play are provided by international lottery sites, which are based outside the country.

The link below leads to a top site that hosts several Satta Matka games played with live game hosts.

Alternatively, you can also try out Jhatka Matka at Lottoland!

These are the Kalyan Matka terms you must know of:

It refers to the game’s opening round, in which three cards are drawn and their values are added to arrive at a single number.

The sequence (Pana) for the opening round would then look something like this:

Before the round begins, players must guess this winning number and place their bets accordingly. Correct predictions win, while wrong predictions lose.

Please note that all Kings, Queens, and Jacks are discarded in Kalyan Matka.

It refers to the game’s closing and final round, in which three cards are drawn again and their values are added to get to a single number. Kalyan Close works in the same way as the opening round. Those who correctly predict the winning number win while those who don’t do so lose.

Kalyan Day is the other name for the opening round.

Kalyan Night is the other name for the closing round.

For instance, taking the above example and assuming a correct prediction, a single Ank bet of ₹100 on the opening round would look something like this:

Similarly, the same bet on the closing round would look something like this:

This term denotes the way the lottery is played. Kalyan Guessing is all about predicting the Kalyan Anks in the opening or closing round, or both as well as the Kalyan Jodi. As discussed earlier, prizes are paid out only for the correct guesses.

What Is the Meaning of Kalyan Matka?

Kalyan is a Hindi word that means “wellbeing,” and Matka is a type of earthen pot. Kalyan Matka, on the other hand, refers to the Matka betting game named after the Matka gambling pioneer, Kalyanji Gala Bhagat, who invented the first-ever game, Worli Matka, in 1962.

Where Did Kalyan Matka Originate?

Kalyan Matka originated in the city of Mumbai in the Indian State of Maharashtra. It is based on the original Matka games – the Worli Matka and the New Worli Matka (later renamed Ratan Matka and then Main Ratan Matka). However, Kalyan is a modern form that does not involve the use of an earthen pot to pull chits. It is card-based; a playing deck of 52 cards is used minus the Kings, Queens, and Jacks.

How to Read a Kalyan Chart? 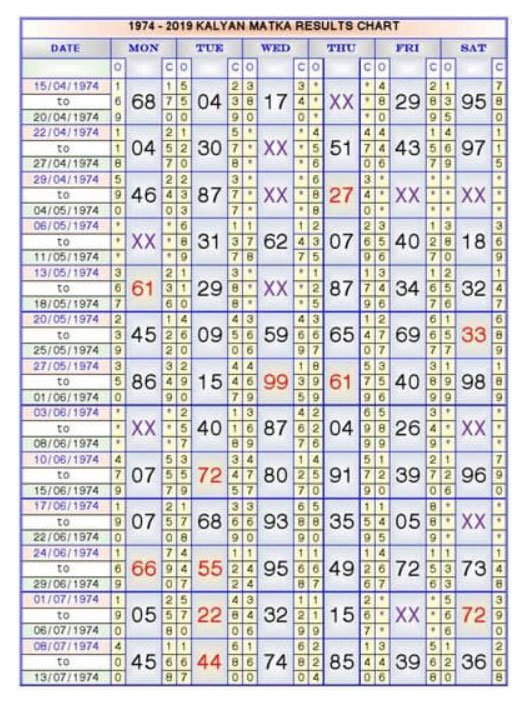 A Kalyan Chart is extremely simple to understand. While reading on, keep the chart we’ve provided here in mind. The columns on it are clearly labeled ‘O’ and ‘C,’ representing the two rounds, opening and closing.

Jodis marked in red are either Cut Numbers (two ankhs with a difference of 5 such as 7 and 2) or Same Numbers. With Cut Numbers, there is no payout for Kalyan Jodis.

How Is Kalyan Satta Number Calculated?

The Kalyan Satta Number is calculated after combining the results of the opening and closing round. Basically, it is the Jodi Number.

Is Kalyan a Legal Form of Matka Lottery?

Like all other single-digit lotteries in India, Kalyan Matka, too, is illegal. Under the Public Gambling Act of 1857, playing Kalyan for money or material things is a criminal offense punishable by a monetary fine or a jail term, or both.

Is There a Legal Alternative to Kalyan Matka?

Want to read more about Matka?